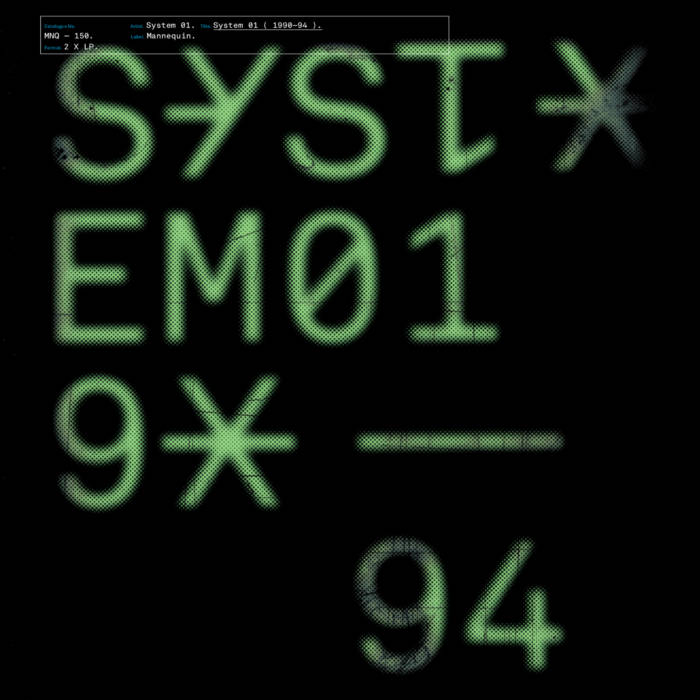 Mannequin Records is proud to present a 2xLP compilation of System 01, the legendary techno project of Johnny Klimek & Paul Browse.

Moving from acid basslines, 808/909 minimalistic reminiscences and hidden movie samples, the core of the compilation is covering Johnny and Paul whole activity as System 01, spanning from their 1990 debut EP "From Psychodelics To Cybernetics" on Interfisch with Timothy Leary, father of the LSD generation, to 1994, with the release of their most acclaimed album "Drugs Work" on Tresor, naturally placing them in the "Der Klang Der Familie".

For the artwork we thought it was a good idea to contact the legendary Ian Anderson from The Designers Republic, who made the original 'Drugs Work' artwork. The British graphic design studio based in Sheffield are best known for electronic music logos and album artwork for Warp Records, having designed the most iconic releases of Aphex Twin and Autechre.

The story of System 01 starts way before the early 90's, and precisely in the early 80's, when Melbourne-born producer/bassist Johnny Klimek achieved worldwide chart success after a move to Berlin, with an act called ‘The Other Ones’, which included his brother Alf and twin sister Jayney Klimek.

In the years that followed Johnny set up his own production studio in Berlin, and together with Paul Browse went on to infiltrate the electronic music scene with System 01 and Effective Force, with releases on Interfisch/Tresor.

Founder member of the Sheffield cult group Clock DVA, Paul Browse, feeling that this body of work could not be topped, left in 1989 both Clock Dva and England, in favour of Berlin, to start a new life and to continue his occult research. The high point and most successful experiments of his period with Clock Dva can be heard on the album "Buried Dreams".

After a short period of quarantine, Paul was welcomed into Berlin's underground research network, meeting Johnny and embarking himself on a series of joint adventures with the city's most dedicated and driven. Together they established the new sound of Berlin. Moments later the Berlin Wall fell.

In fact, after the fall of the Berlin Wall, unused areas and buildings were ready to be filled with new life all over Berlin, with both parts East and West conquering new open and unclaimed spaces. Clubs, galleries, studios and studios emerge - often only for a few weeks. Berlin will soon be the epicenter of a new culture, attracting thousands of fans from all over the world.

In meantime Johnny Klimek started a side-career, touring in Europe with the Nina Hagen Band as bass player, which would later lead to writing and co-producing her next album in collaboration with Reinhold Heil.

In that same year a partnership with director/composer Tom Tykwer and Reinhold Heil was established, being a 3-piece production team dedicated to the output of film scores, beginning with the 1997 film "Winter Sleepers" and following with ‘Run Lola Run’, which incidentally is the most successful German film in the US since ‘Das Boot’.

After many successfull soundtrack features, including among the others 'Cloud Atlas' - nominated for a Golden Globe Award for Best Original Score - and Romero's 'Land Of The Dead', Johnny is the composer of the 4th movie of the Matrix saga, 'Matrix Resurrections', due to be released on 18th December 2021.

Mastered by Rude 66, 2020.
Graphics by The Designers Republic, UK, 2020.
Tracks selection by System 01 and Alessandro Adriani.